AbraSilver has entered into an option agreement to acquire a 100% interest in the La Coipita project, located in the mining-friendly San Juan province, Argentina.  The project is located in the prolific Miocene porphyry-epithermal belt and hosts multiple d porphyry copper-gold targets that have been identified from previous exploration work. maintains its primary focus on exploring and advancing the Diablillos silver-gold project.

Highlights of the La Coipita project:

The project encompasses a large of approximately 70,000 hectares is in the western portion of Calingasta Department, located in the mining-friendly San Juan Province of Argentina adjacent to the Chilean border.  Access to the area is via Calingasta, the nearest town, along 125 km of unpaved road to the Los Azules Cu-Mo porphyry project (Indicated Resource of 962 Mt @ 0.48% Cu) (1) and then north along a dirt road to the La Coipita Cu-Au project. Elevation across the property ranges between 3,500 and 4,500 MASL with moderate to high relief. 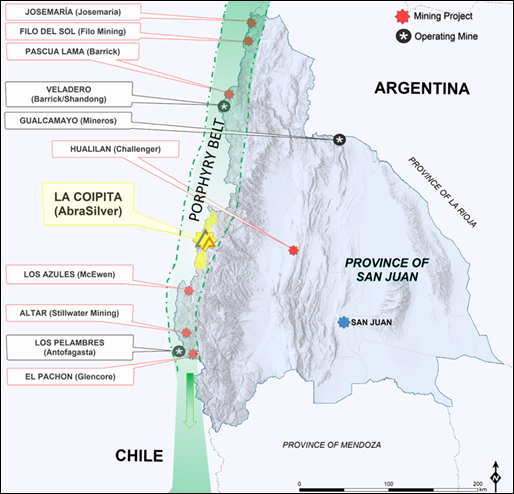 The project lies within the Miocene porphyry-epithermal belt of Argentina and Chile.  During the mid-Miocene, the area developed an active magmatic arc, on its western side, and a back-arc extensional environment, to the east. Contemporaneous with the deposition of volcanic/volcaniclastic rocks was the emplacement of porphyry Cu-Mo-Au and/or epithermal Au-Ag (Cu) systems (e.g. Los Pelambres/El Pachón Cu-Mo porphyry, Los Azules Cu-Mo porphyry, El Indio/Veladero/Pascua Lama HS Au cluster).

The Company’s maiden drill campaign at La Coipita consisted of two initial deep holes to test a potential large copper-gold-molybdenum porphyry target.  Based on the successful results, additional drilling is now being planned for the upcoming field season, which is expected to start in late-September 2022.

The results were announced on June 28, 2022.  Highlights include:

The first agreement, announced on March 02, 2020 includes the following payments to acquire a 100% interest:

As per the terms of the Option Agreement, the Vendor will retain a 1.10% net smelter return royalty (the “NSR Royalty”).  AbraSilver has assigned to Altius Resources Inc. (a wholly owned subsidiary of Altius Minerals Corporation) an exclusive right to repurchase the royalty for US$3,000,000 at any time during the term of the option agreement, or US$5,000,000 thereafter until start-up of construction of the Project.

The second agreement, announced on August 17, 2021 includes the following payments for a 100% interest:

As per the terms of the Agreement, the Vendor will retain a 1.10% net smelter return royalty on the Yaretas Claims and AbraSilver has an exclusive right to repurchase the royalty for US$5,000,000 at any time.