Toronto - June 28, 2022: AbraSilver Resource Corp. (TSX.V: ABRA; OTCQX: ABBRF) ("AbraSilver" or the “Company”) is pleased to announce the discovery of a significant new copper-gold-molybdenum porphyry system at its La Coipita project (the “Project”) located in the San Juan province of Argentina.

The Company has an option agreement to acquire a 100% interest in the Project which encompasses a large area, totaling approximately 70,000 hectares, within the Miocene porphyry-epithermal belt of Argentina and Chile (see Aug. 17, 2021, news release).  The Company’s maiden drill campaign at La Coipita consisted of two initial deep holes to test a potential large copper-gold-molybdenum porphyry target.  Based on the successful results, additional drilling is now being planned for the upcoming field season, which is expected to start in late-September 2022.

John Miniotis, President and CEO, commented, “We are delighted to have intersected a long interval of consistent, copper-gold porphyry mineralization at La Coipita, as part of the first-ever deep exploration drill campaign conducted on the Project. Our results demonstrate the presence of a large copper-gold system and we have now successfully identified a large target area of interest for future drilling programs on this new, exciting project.”

Dave O’Connor, Chief Geologist, commented, “Our La Coipita discovery is located in one of the world’s most promising geological belts, featuring numerous large-scale copper-gold porphyry projects running alongside the border of Argentina and Chile.  The discovery hole, DDHC 22-002, intersected pyrite and associated chalcopyrite mineralisation in fine disseminations and stockwork veining in a major porphyry system.  Future drilling will now focus on identifying the progenitor porphyry intrusion, which will help us evaluate La Coipita’s size and grade potential.”

Beneath the potassic alteration zone the hole intersected predominantly pyrite mineralisation, having deviated eastwards and exited the main copper zone. Importantly, the hole remained in mineralisation through to its final depth of 1,202.5 metres.

Diamond drill hole DDHC 22-001 was oxidized to a downhole depth of approximately 865 metres, having encountered a major fault, and penetrated through silicified ignimbrite, where there is remnant high sulphidation epithermal mineralisation, and into underlying granite and dacitic rocks. The hole encountered numerous narrow zones of tennantite and enargite dominant mineralisation with copper, gold and occasional silver values. It is believed the epithermal part of the system has largely been eroded away in this area. Evidencing porphydic style hydrothermal alterations with molybdenum anomalies on surface.

The Company anticipates announcing several upcoming milestones over the next few months, including:

The La Coipita project consists of over 70,000 hectares in the western portion of Calingasta Department, located in the mining-friendly San Juan Province of Argentina adjacent to the Chilean border.  Access to the area is via Calingasta, the nearest town, along 125 km of unpaved road to the Los Azules Cu-Mo porphyry project (Indicated Resource of 962 Mt @ 0.48% Cu and 0.06 g/t Au) (2) and then north along a dirt road to the La Coipita Cu-Au project. Elevation across the property ranges between 3,500 and 4,500 MASL with moderate to high relief.

The project lies within the Miocene porphyry-epithermal belt of Argentina and Chile.  During the mid-Miocene, the area developed an active magmatic arc, on its western side, and a back-arc extensional environment, to the east. Contemporaneous with the deposition of volcanic/volcaniclastic rocks was the emplacement of porphyry Cu-Mo-Au and/or epithermal Au-Ag (Cu) systems (e.g. Filo del Sol HS with Cu-Au porphyry, Los Pelambres/El Pachón Cu-Mo porphyry, Los Azules Cu-Au-Mo porphyry, El Indio/Veladero/Pascua Lama HS Au cluster).

The Company has an option to earn a 100% interest in the La Coipita project by making remaining staged-payments totaling US$6.875 million by August 2026.

(2) Mineralization contained on nearby properties is not indicative of similar mineralization being found on the La Coipita Project. 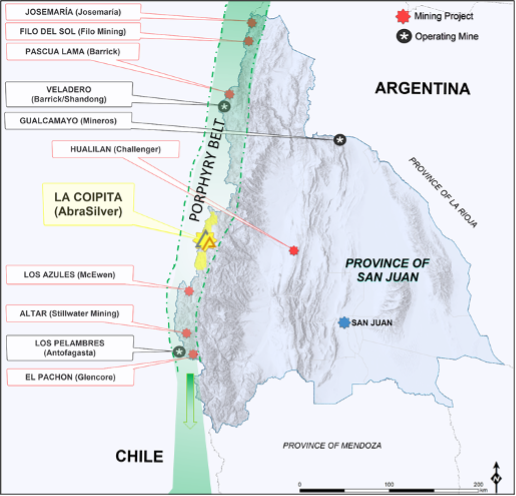 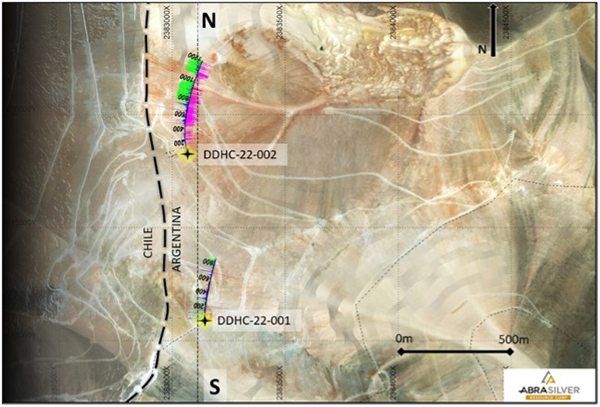 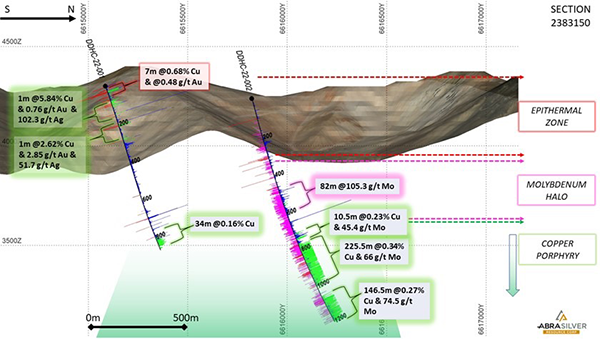 AbraSilver applies industry standard exploration methodologies and techniques, and all drill core samples are collected under the supervision of the Company’s geologists in accordance with industry practices. Drill core is transported from the drill platform to the logging facility where drill data is compared and verified with the core in the trays. Thereafter, it is logged, photographed, and split by diamond saw prior to being sampled. Samples are then bagged, and quality control materials are inserted at regular intervals; these include blanks and certified reference materials as well as duplicate core samples which are collected in order to measure sample representivity. Groups of samples are then placed in large bags which are sealed with numbered tags in order to maintain a chain-of-custody during the transport of the samples from the project site to the laboratory.

All samples are trucked to the SGS preparation facility in San Juan city. From there, the samples are received by the SGS offices in Salta who then dispatch them to the SGS preparation facility in San Juan. From there, the prepared samples are sent to the SGS laboratory in Lima, Peru where they are analyzed. All samples are analyzed using a multi-element technique consisting of a four acid digestion followed by ICP/AES detection, and gold is analyzed by 50g Fire Assay with an AAS finish. Silver results greater than 100g/t are reanalyzed using four acid digestion with an ore grade AAS finish.

David O’Connor P.Geo., Chief Geologist for AbraSilver, is the Qualified Person as defined by National Instrument 43-101 Standards of Disclosure for Mineral Projects, and he has reviewed and approved the scientific and technical information in this news release.

AbraSilver is a well-funded silver-gold focused advanced-stage exploration company. The Company is rapidly advancing its 100%-owned Diablillos silver-gold project in the mining-friendly Salta province of Argentina, which has a current Measured and Indicated Mineral Resource of over 90 million ounces of silver and 1.0 million ounces of gold.  The updated PEA study completed in November 2021 demonstrates that Diablillos has the potential to be a highly-economic project. The Company is led by an experienced management team and has long-term supportive shareholders including Mr. Eric Sprott.  In addition, AbraSilver owns a portfolio of earlier-stage projects including the La Coipita copper-gold project in the San Juan province of Argentina. AbraSilver is listed on the TSX-V under the symbol “ABRA” and in the U.S. under the symbol “ABBRF”.