Toronto – August 17, 2021: AbraSilver Resource Corp. (TSX.V:ABRA; OTCQX: ABBRF) ("AbraSilver" or the “Company”)  is pleased to announce that it has executed an Option to Purchase agreement (the “Agreement”) through its wholly-owned subsidiary, AbraPlata Argentina SA, to acquire additional prospective claims (the “Claims” or “Yaretas Claims”) near its La Coipita project (“La Coipita” or the “Project”) located in the San Juan province of Argentina. In addition Abraplata Argentina SA requested, through the original owners of La Coipita, New Areas of additional mining tenure consolidating the two main blocks of the property (the “New Areas”).

John Miniotis, President and CEO of AbraSilver, commented, “We are excited to be able to consolidate a strategic part of the prospective La Coipita copper-gold project.  Consolidation of the claims creates a single, large property package with numerous exploration targets in one of the world’s most endowed copper-gold belts.  This transaction enhances our project pipeline with an additional drill-ready exploration project, where we expect to commence an initial drill program by year-end.”

On March 2, 2020, the Company entered into an option agreement to acquire a 100% interest at La Coipita for total payments of US$4.27 million, over a period of five years.   To date, the first two payments totaling US$165,000 have been made.  The Project is located in the mining-friendly San Juan Province of Argentina adjacent to the Chilean border.

With the addition of the new prospective Claims and New Areas, the consolidated Project now encompasses a large area totaling approximately 70,000 hectares in the western portion of Calingasta Department. Access to the area is via Calingasta, the nearest town, along 125 km of unpaved road to the Los Azules Cu-Mo porphyry project (1) and then north along a dirt road to the La Coipita copper-gold project. Elevation across the property ranges between 3,500 and 4,500 MASL with moderate to high relief.

Highlights of the Project 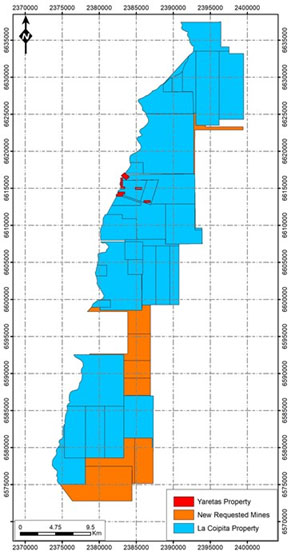 The Company entered into the Option Agreement with an arm’s length private owner (the “Vendor”).   In order to exercise the option to acquire a 100% interest in the Yaretas Claims, the Company is required to complete the following payments:

As per the terms of the Agreement, the Vendor will retain a 1.10% net smelter return royalty on the Yaretas Claims and AbraSilver has an exclusive right to repurchase the royalty for US$5,000,000 at any time.

The Company filed, through the original owners of La Coipita, seven additional discovery claims and one exploration permit, adding more than 10,000 hectares of mining tenure (“New Areas”) to the Project. The New Areas were incorporated to the original Option Agreement executed with said owners in 2020, with no further payments than those stipulated therein.

AbraSilver is currently defining an initial exploration program and budget at La Coipita for the 2021-2022 field season.  The geological potential will be further assessed and drill sites selected in preparation for an initial 2,000m drill program expected to commence in Q4/2021.

The target areas identified on the La Coipita project have coincident geological, geochemical and geophysical features that are consistent with the presence of a copper-gold mineralised porphyry intrusive either at depth, beneath a gold-copper high sulphidation epithermal system as at Yareta, or as marginal inter-mineral porphyry phases such as Dona Rosa North and Quebrada Yareta south targets. 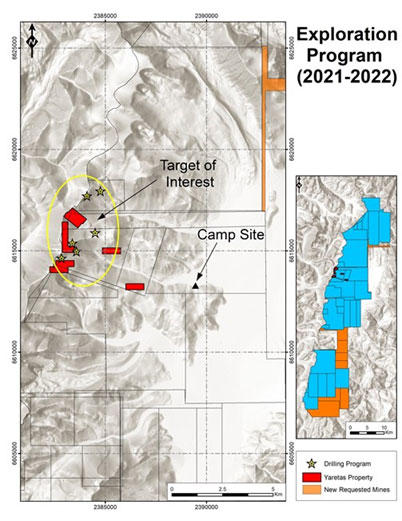 Notes:
1. Mineralization contained on nearby properties is not indicative of similar mineralization being found on the La Coipita Project
2. The historic drill results presented in the table above have not been independently verified by the Qualified Person for this release, and remain subject to independent verification. The drill results were originally published in a news release by Oro Belle Resources Corporation dated June 24, 1997.  Oro Belle Resources Corporation was a 50% owner at the time of the announcement, through a wholly owned subsidiary who held a 50% Joint Venture interest.

Technical information in this news release has been approved by David O’Connor P.Geo., Chief Geologist for AbraSilver, and a Qualified Person as defined by National Instrument 43-101 Standards of Disclosure for Mineral Projects.

AbraSilver is a well-funded silver-gold focused advanced-stage exploration company. The Company is rapidly advancing its 100%-owned Diablillos silver-gold project in the mining-friendly Salta province of Argentina, which has an Indicated resource base of over 140Moz on a silver-equivalent basis and an initial open pit PEA study completed in 2018.  The Company is led by an experienced management team and has long-term supportive shareholders including Mr. Eric Sprott and SSR Mining.  In addition, AbraSilver owns a portfolio of earlier-stage copper-gold projects, including the Arcas project in Chile where Rio Tinto has an option to earn up to a 75% interest by funding up to US$25 million in exploration.  AbraSilver is listed on the TSX-V under the symbol “ABRA” and in the U.S. under the symbol “ABBRF”.