BUENOS AIRES – August 2, 2018, - AbraPlata Resource Corp. (TSX.V:ABRA; OTC: ABBRF; Frankfurt: 1AH) ("AbraPlata" or the "Company") is pleased to announce an update on its Diablillos property, located in northwestern Argentina.  The Company has been conducting a review of historical drill data to determine if higher grade silver and gold zones could potentially be exploited using underground mining methods.  An underground mining approach could entail significantly less initial capital than the large open pit approach contemplated in the Company's 2018 Preliminary Economic Analysis ("PEA") on the Diablillos project.  The PEA demonstrated that Diablillos has the potential to product an average of 9.8 million silver-equivalent ounces per year over an eight year mine with robust economics.  Building such a large operation would require estimated initial capital of US$293 million.  (Refer to technical report filed April 16, 2018, on SEDAR.com for full details of the PEA.)

The comprehensive drill database review by AbraPlata follows the identification by Nick Tate, the Company's consulting geologist and epithermal specialist, that high grade mineralized cores are strongly correlated with steeply dipping, tabular hydrothermal breccia bodies in the main Oculto deposit (Figure 1).  Historical drilling, which totals about 88,000m in 450 drill holes, intercepted these breccias in numerous drill holes with the best mineralization being encountered at the intersection of the Main Breccia Zone and the Cross Breccia Zone.

Highlights of historical drill the core of the Oculto deposit are provided in Table 1. The collars of the drill holes listed in Table 1 cover a strike length of over 400 metres and a width of over 200 metres,  suggesting that Oculto has a thick, high grade core where there is pervasive brecciation.

“The implications from the improved geological understanding of the Oculto deposit are that the near-vertical breccia bodies are largely untested at depth and, as indicated in our April 30, 2018, news release, we believe that Oculto has the potential to host high grade gold mineralization below the current mineral resource,” commented Willem Fuchter, President and CEO of AbraPlata.  “An underground option may indicate a processing plant of reduced capacity and increased recoveries due to a higher grade feed, and would require less capital.  In addition, significant pre-stripping of waste material would no longer be necessary, resulting in further savings and the high grade zones at depth can then be tested from underground.  Furthermore, in the event that Oculto makes sense as an underground operation, then the potential high grade gold mineralization at depth becomes significantly more compelling than in an open pit approach.  While we believe the open pit approach to Diablillos remains a viable option, the Company plans to conduct additional work to assess if an underground mining approach that is less capital intensive may be a viable alternative and if a PEA on such a scenario is warranted.” 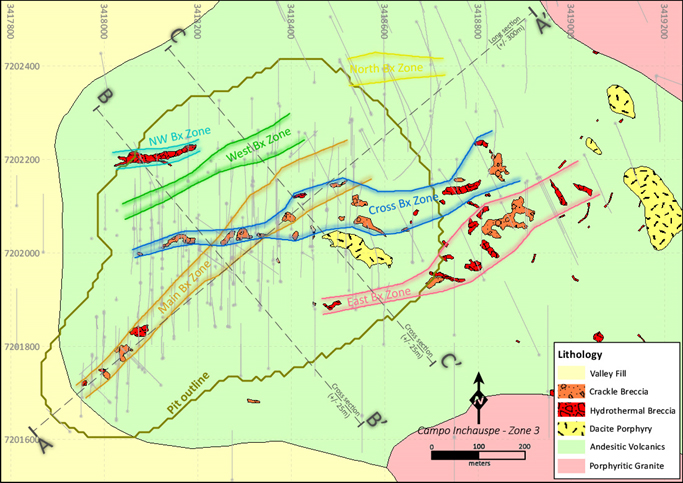 The higher grade mineralization at Oculto tends to be structurally controlled. AbraPlata has done considerable work over the past year mapping the surface and re-logging  of  key drill holes in order to interpret the structural geology at Oculto and arrive at a geological and geometrical model of the mineralized zones.  The most important mineral bearing zones are the Main, Cross, and West Zones, although mineralization has been intercepted in the other zones.  In addition, breccia zones have been also identified in the satellite occurrences surrounding Oculto, notably at, Fantasma, Laderas, Enigmatica, Concepcion, and Nebulosa.

More specifically, mineralization appears to be controlled by NW- and NE-trending structures along which significant tabular zones of hydrothermal breccia have been developed that, in turn, host the high grade mineralization.  To date, six specific breccia zones have been identified at Oculto: Main Breccia Zone; Cross Breccia Zone; East Breccia Zone; West Breccia Zone; NW Breccia Zone; and North Breccia Zone (Figure 1).   The Main Breccia Zone and the Cross Breccia Zone have an estimated strike extent of at least 800m.  The East and West Zones have strikes of 650m and 450m respectively.  The Main and Cross Breccia Zones form a continuous zone of mineralization which extends for more than 1000m (Figure 2), and a significant vertically dipping pipe-like body over 80m in diameter and extending some 150m in depth lies at the intersection of the Main and Cross Zones (Figure 3a).  This mineralized plug is open at depth.  Likewise, the general lack of drilling below the current PEA pit shell together with the results of few deep holes that have been continued below the current pit depth such as DDH-97-007A (see Figure 3b) indicate the considerable potential for the definition of additional resources at depth in the basement rocks.

Figure 3b – Section C-C’ through the West Breccia Zone, showing the high grade gold potential below the pit 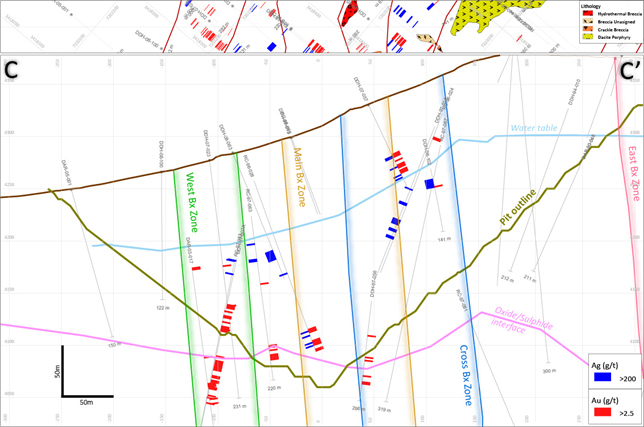 Given the fact that mineralization at Oculto is of an epithermal, high sulphidation nature, mineralization may extend for hundreds of meters below the current pit shell.  This creates the potential of increasing resources from Oculto significantly, especially gold resources.  High grade gold-rich zones are associated with hydrothermal breccias at the interface of the basement rocks with the overlying volcanics and volcaniclastics  and confined to tight structures within the basement.  Oculto has multiple characteristics of a gold deposit with a silver cap.

The long section through the Main and Cross Zones (Figure 2) shows elevated levels of silver and gold mineralization occurring in a zone that is 5 to 30m in thickness and occurs approximately 90 to 120m below current topography and just below the current water table (blue line on sections), which lies about 80m below the surface.  This enriched mineralized zone has been interpreted as a supergene enrichment zone developed just below the water table during emplacement.  Numerous high grade silver and gold drill intercepts have been encountered in this zone with grades reporting over 200g/t AgEq.  Sample intercepts from historical drilling of the high grade silver and gold mineralization in the enrichment zone are shown in Table 2.

Notes:     1.  Intervals are down-the-hole and do not represent True Widths
2.  No grade capping has been applied
3.  Equivalent grades (AgEq or AuEq) have been calculated on the basis of Au:Ag = 75:1

A gold-rich zone lies at an angle to the silver zone, and is generally better developed at depth.  Much of the gold in this zone is hosted by breccia bodies both within the NE-trending structures and also in breccias developed at the intersection of the basement rocks and overlying volcanics and volcaniclastics.  At depth, the gold generally occurs in the vicinity of the oxide-sulphide interface (maroon line on the  sections) and is interpreted to represent hypogene mineralization.  Examples of historical drill intercepts in breccia zones of the gold rich zones are shown in Table 3.

All scientific and technical information in this news release has been approved by Willem Fuchter, PhD PGeo, President & CEO of AbraPlata Resource Corp and a qualified person as defined by National Instrument 43-101.

ON BEHALF OF THE BOARD
ABRAPLATA RESOURCE CORP.

For further information about AbraPlata and its projects, please visit the Company’s website at www.abraplata.com.