Toronto - November 04, 2020: AbraPlata Resource Corp. (TSX.V:ABRA; OTCPK: ABBRF) ("AbraPlata" or the “Company”) is pleased to announce the completion of geophysical surveys on its wholly-owned Diablillos Project, and provides the following geological observations and next steps:

David O’Connor, Chief Geologist, commented, “We are excited to have identified several magnetic anomalies associated with a conjugate set of East-Northeast and West-Northwest striking structures that are new, priority drill targets with the potential to expand the silver-gold resources at Oculto, Fantasma and other areas close to the known resource base.”

The detailed ground magnetic survey over the Oculto Zone was designed to determine lineaments which may reflect possible structures at Oculto, as existing silver and gold resources are strongly correlated to faults and steeply dipping hydrothermal breccias. The magnetic survey has successfully shown the extension of a pronounced set of East-Northeast trending structures which are mineralised at the Oculto deposit, and a conjugate set of West-Northwest trending structures, one of which hosts the Fantasma mineralisation one kilometre west of Oculto. The area between these two deposits is a colluvium covered plain and the new ground magnetic survey will allow the Company’s geologists to site drill holes on targets in this area to explore for extensions of the mineralised system (Figure 1). 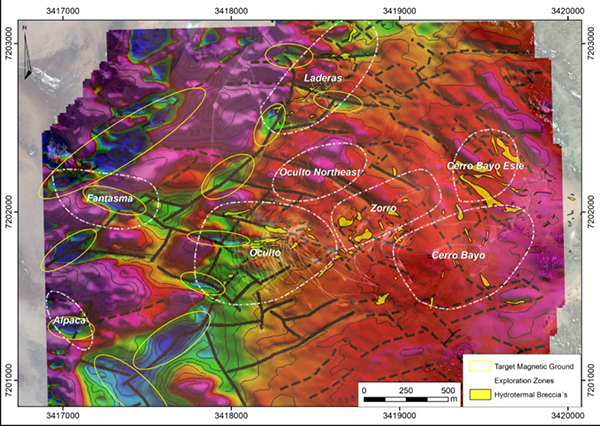 Targets for future drilling occur where the interpreted structures follow zones of low magnetic intensity due to possible magnetic destruction caused by the introduction of hydrothermal fluids.

The new magnetic data shows several alteration zones defined by a zone of low magnetic anomalies interpreted to be caused by magnetite destruction from later stage argillic overprinting along north-east and north-west structures.   The low magnetic areas represent priority targets for further exploration to test extensions of mineralisation within this complex system. 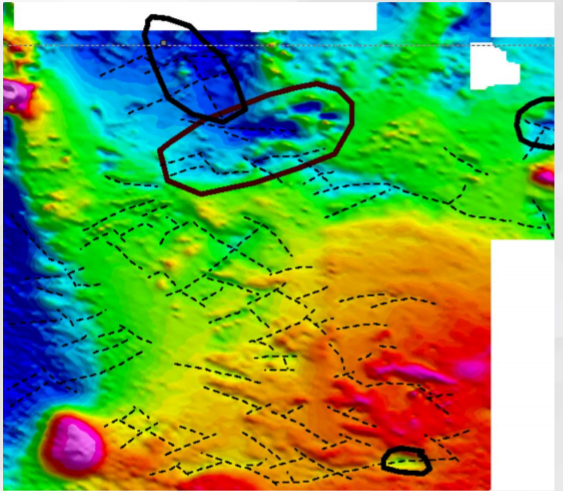 AbraPlata is a mineral exploration company with a diversified portfolio of silver-gold and copper exploration projects in Argentina and Chile. The Company is focused on advancing its 100%-owned Diablillos silver-gold project in the mining-friendly Salta province of Argentina, which is well-advanced, with more than US$40 million spent historically on exploration with drilling ongoing and an initial open pit PEA completed in 2018.  The Company is led by an experienced management team and has long-term supportive shareholders including Mr. Eric Sprott, Altius Minerals and SSR Mining.  In addition, AbraPlata owns the Arcas project in Chile where Rio Tinto has an option to earn up to a 75% interest by funding up to US$25 million in exploration.  AbraPlata is listed on the TSX-V under the symbol “ABRA”.