Toronto - August 12, 2020: AbraPlata Resource Corp. (TSX.V:ABRA; OTCPK: ABBRF) ("AbraPlata" or the “Company”) is pleased to announce the commencement of Phase 2 drilling at its 100% owned Diablillos silver-gold project, located in the mining-friendly Salta Province of Argentina.

This phase of the diamond drilling program is expected to consist of 10 holes, totalling approximately 5,000 metres. The drilling has two main objectives, being to explore for additional high grade gold and silver mineralisation to augment the current oxide resources at the Oculto Zone and adjacent areas, and also to test for the continuity of underlying copper-gold sulphide mineralisation which may be linked to a porphyry intrusive that would have been the source of mineralising fluids.

David O’Connor, Chief Geologist of the Company, stated “We anticipate adding tonnage and grade to the gold and silver resources, both within the Oculto Zone and at satellite areas that have only had very limited or no drill testing. We are also excited about our continued exploration of the hypogene mineralisation underlying oxide mineralization in the Oculto Zone, and has the potential to be a substantially larger resource.”

The first priority target area consists of the core Oculto Zone, which hosts the majority of the currently known silver-gold mineralization, as well as satellite areas (Laderas, Northeast Gold Zone, Zorro, Cerro Bayo and Cerro Bayo East). The proposed drill holes are shown on Figure 1 below.  A detailed ground magnetic survey is planned to help define drill targets based on interpreted structures at depth combined with recently mapped outcropping siliceous breccia zones in these satellite areas.

The second priority target area consists of the sulphide mineralisation beneath the oxide resources in the Oculto Zone, which is hosted in Ordovician basement rocks comprised of granitoids and meta-sediments (see Figure 2). Based on recent drilling, these rocks have responded differently to the injection of mineralising fluids, with the north-eastern meta-sediments and granitoids being less restrictive. This is a new target area.

The Company expects to receive results from the previously completed four drill holes over the next several weeks, at which stage the Company will provide an update.  Sample shipments to the assay lab have been delayed due to increased transportation safety protocols associated with COVID-19 preventative measures, resulting in slower turnaround for assay results. 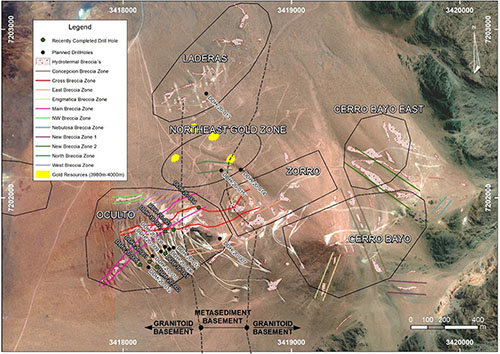 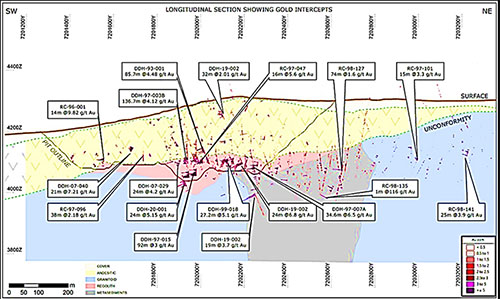 The 80 km2 Diablillos property is located in the Argentine Puna region - the southern extension of the Altiplano of southern Peru, Bolivia, and northern Chile - and was acquired from SSR Mining Inc. by the Company in 2016. There are several known mineral zones on the Diablillos property, with the Oculto zone being the most advanced with approximately 85,000 metres drilled in 306 RC and diamond drill holes. Oculto is a high-sulphidation epithermal silver-gold deposit derived from remnant hot springs activity following Tertiarty-age local magmatic and volcanic activity. Comparatively nearby examples of high sulphidation epithermal deposits include: El Indio, Chile; Veladero, Argentina; Filo del Sol, Argentina; and Pascua Lama, on the Chile-Argentine border.

AbraPlata is a mineral exploration company with a diversified portfolio of silver-gold and copper exploration projects in Argentina and Chile. The Company is focused on advancing its 100%-owned Diablillos silver-gold project in the mining-friendly Salta province of Argentina, which is well-advanced, with more than US$35 million spent historically on exploration with drilling ongoing and an initial open pit PEA completed in 2018. The Company is led by an experienced management team and has long-term supportive shareholders including Altius Minerals and SSR Mining. In addition, AbraPlata owns the Arcas project in Chile where Rio Tinto has an option to earn up to a 75% interest by funding up to US$25 million in exploration. AbraPlata is listed on the TSX-V under the symbol “ABRA”.